Showing some appreciation for the dark side with my new Star Wars reversible necklace. 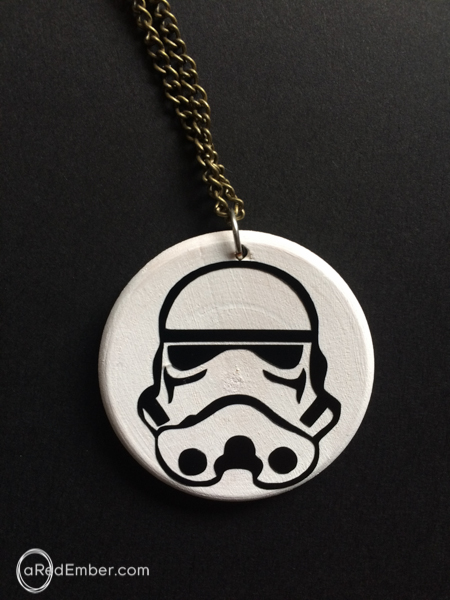 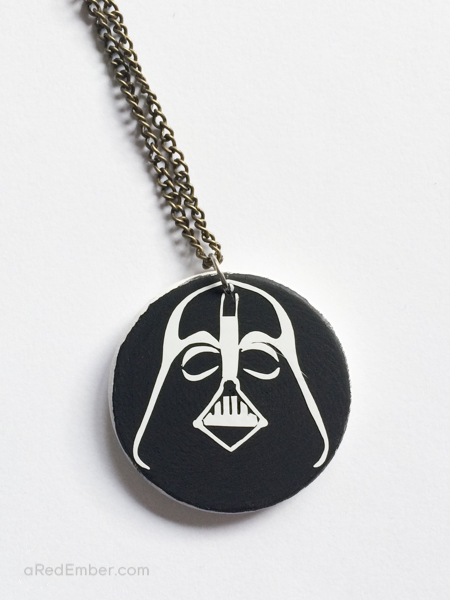 Has everyone seen and loved the new Star Wars movie, The Force Awakens? It was so good! I was a little nervous when they announced that Disney would be making a new Star Wars movie. I was super nervous that they could never live up to the original and just kill it. Nope. JJ Abrams did an amazing job with this one and I am excited to see the next one he creates. To commemorate, I just had to create this star wars reversible necklace.

I debated doing an outline of Kilo Ren instead of Darth Vader but I decided to keep it old school.

When I was little I had a lot of silly jewelry. Ice cream earring. Candyland bracelet. Farm animal earrings. Somewhere along the way I stopped shopping at Claire’s and started buying, making, and wearing less comical jewelry (maze earrings, bike tire earrings, washer necklace, leather necklace, etc.). I am ready to bring it back! Starting with Star Wars. Ice cream tomorrow!

Once again, this is a Cricut project. I just can’t get enough of that thing! Everything is so much easier and so much more accessible! Once I started, every new project I thought of involved my Cricut. I used the remaining wooden circle from the maze earring but painted it instead of leaving it wooden. Then using my Cricut, I cut Darth Vader and a stormtrooper out of vinyl. I had a hard time with the vinyl on this project. The tight details were difficult for the machine and it was bunching up. I had to remove a lot of the detail in Darth’s mask before I could find a design that would actually work.

Overall I am super happy with this new necklace and I have received tons of compliments! I usually wear the stormtrooper side because I think it came out better. But I switch it up!

Now I am just waiting for the next Star Wars!

« Canvas Kitchen Banner
Join me for a Craft night at Splendid »