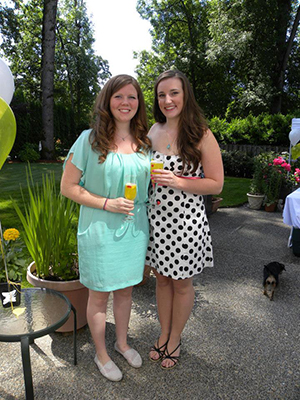 One of my best friends Stephanie Buxton got married a few weeks ago and I was lucky enough to be her maid of honor. It was an absolutely beautiful wedding in Oregon at Wine Country Farm, a Bed & Breakfast winery. It was on a hill with an amazing view of the valley and other wineries in the area.

Part of my maid of honor duties were throwing the bridal shower. Because of timing, we had the party in June. Stephanie’s aunt, who is a talented pastry chef, hosted it at her house and made all the food. The food was incredible. It look beautiful and delicious. Both Stephanie and I were lucky to have her help.

I was in charge of decorations for the event. We had the party in Stephanie’s aunt, Debbi’s back yard so it was already filled with flowers. (This is why Oregon is so great! Everything grows!) Luck for us it was a beautiful sunny day. The colors for the shower were yellow and lavender which were easy to work with. 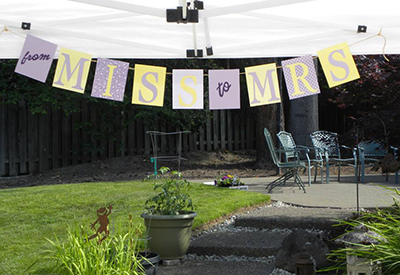 I made a couple simple banners. One read, “From Miss to Mrs”, to match the invites and the other said “S loves K”. I had some serious help on the banners because cutting each letter out would have been a nightmare! My boyfriend’s mom and her friend helped me with the letters using a fancy paper cutting machine. Similar to this one. With their help, I was able to create an adorable banner for the party.

To add to the table decorations, I printed signs with the same sayings on them. 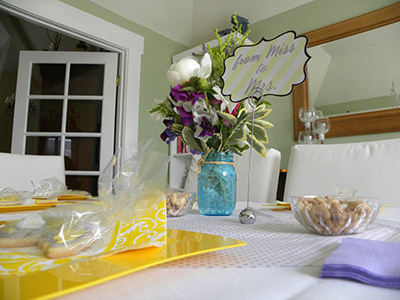 Stephanie’s grandmother picked up fresh flowers for the tables. It was simple and perfect. 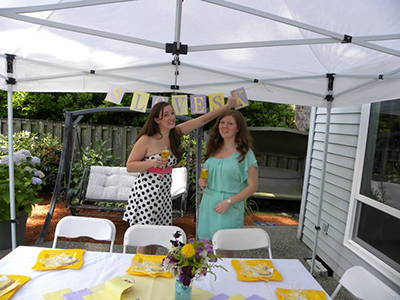 I tried to correct the saying on this banner because it was obviously supposed to read “S loves L”.