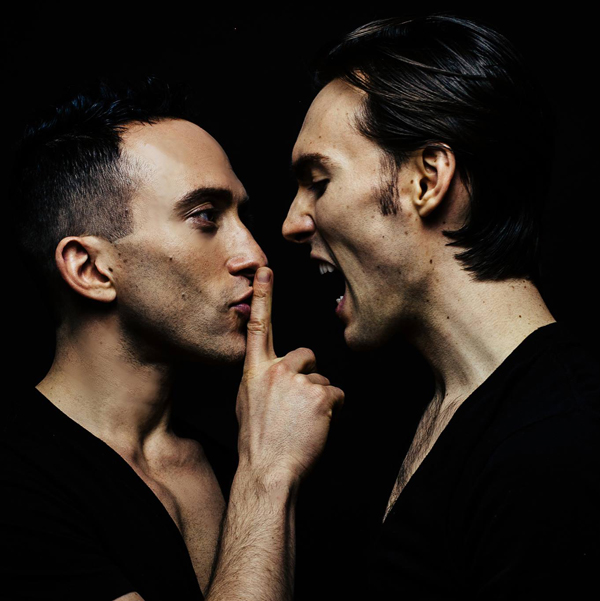 I am excited to share with you two talented, driven, amazing artists: Eric and Aaron. I went to one of their shows over a year ago and was blown away. Not only are they fantastic singers but they are captivating performers.

Eric and I go way back. He was actually in my mom’s reading class in 4th grade.  But we didn’t get to know each other until middle school when we danced together at the same studio. We also used to MC a bunch of events together in 8th grade. But that was a different life.

Now Eric and Aaron have joined forces and they are on fire! Their Kickstarter campaign was 250% funded (wow!). This means, not only are they releasing an album, but they are able to handmade merchandise and they are planning a cross-county tour this summer (More on this later so keep reading)!

Tell us a little bit about Eric and Aaron and how you two got started.

Eric: We met in a bar in Hell’s Kitchen in NY in August 2011.  Aaron was a voice teacher and I was in need of a new one as mine was on tour.  We had a lesson the next week and I never left…  In the Spring that year we wrote a song for a dog benefit.  I didn’t think it would become an all-consuming endeavor, but here we are, three years later, putting out our first EP on our own label.

Aaron: Yeah, we were both subconsciously looking for a massive career and life change and because we found each other we discovered what we really wanted to be doing.

What has been your biggest challenge so far?

Aaron: Besides the fact that moving forward in any career is incredibly challenging, the number of times that we have thrown out dozens of songs in favor of a new direction is (almost) funny at this point.  Having the absolute freedom to do what you choose is not as easy as it sounds.

Eric: Nope, it means you have to be decisive and pick a direction to go in.  Yeah, sometimes that means we throw out a bunch of songs, but at the same time, we get to make those choices.  I think the hardest thing though, is working with the person you live with.  We’ve had to learn to communicate better than I’ve ever had to in a relationship.  At the same time, we can literally wake up, write a new song, get the parts right, find the groove, and post it to our social media pages that night.  That’s pretty freakin awesome.

What’s been the most rewarding?

Eric:  I feel like I’ve found something more important and worthwhile than anything I’ve ever done before.  That applies to our work and our relationship.

Aaron: This is a journey that will never end and the life lessons keep on comin. Learning to trust.

Where do you look for inspiration?

Aaron: Everywhere.  Books a lot.  Other music.  Trees, birds, the crack in the ceiling, dreams, writing stories.  Each other.

Eric:  Lots and lots and lots of reading and music listening.  When I’m not reading, I’m listening to someone else.  What does their music world sound like, what rhythmic qualities do their records have?  Poetry is a biggie.  John Ashbery’s work has been immensely helpful.

What do you feel has influenced your music the most?

Eric:  Adding electric guitar has impacted us a lot.  I got my Gibson last summer two days before a show.  It seemed like a good idea at the time and our soundscape has found an edge that we are both really digging.

Aaron:  We are becoming more and more fearless with words and melodies and that a song can come from anywhere…

Aaron:  Always changes but lately we start playing some chords or a figure and a melody and groove erupt.  And then we layer words and more sections of the song until the cake is iced and sliced.

How has your previous experience as a dancer and vocal instructor helped you get to where you are today?

Eric:  If I hadn’t been a dancer in need of voice lessons we wouldn’t even be doing this interview.
Aaron: I’ve had a varied and awesome life performing so far – but nothing has prepared me for this.  It’s everything I’ve done times 40 all rolled into one.  I do think my previous lives have helped me to recognize that humans are an all consuming art form already  – so why not focus it?

What is your biggest goal or dream for Eric and Aaron?

Eric:  This summer we are going on a tour of the Northern US.  Eventually touring the world would be amazing.
Aaron:  My biggest dream for us is to keep making music that we love and that our fans connect with.
Don’t you just love them!? They are doing a cross-country tour this summer so you actually have a chance to see them live.
Follow their Facebook page to keep updated on their tour and to hear more of their songs.
And for anyone in Portland, I am working on hosting them for a house concert at the beginning of September. You are ALL invited so I will keep you update on their final Portland plans.
PS For more interviews check out Chatting with Photographer Emily Wenzel
« Keeping it all Under Control + Fit Test Giveaway!
Blog Redesign »