You are here: Maxalt / Archives for Cooking

I might have gone a little over boarding on the desserts for the Dexter party this fall. I saw some amazing desserts online and I had a free Sunday so I decided to go for it.

If you have not seen the show, add it to your list! It’s creepy and addicting. Basically the main character is a blood splatter analyst in the homicide department of Miami Metro Police and also a serial killer in his free time. Every serial killer has to keep a souvenir of their kills and Dexter does so in the form of a blood slide containing a drop of blood from each of his victims.

So for the party, I made red velvet cupcakes with blood splatter icing. The blood splatter red gel icing that I splattered on with a tooth brush. It made my kitchen look like a crime scene since it was a little messy. 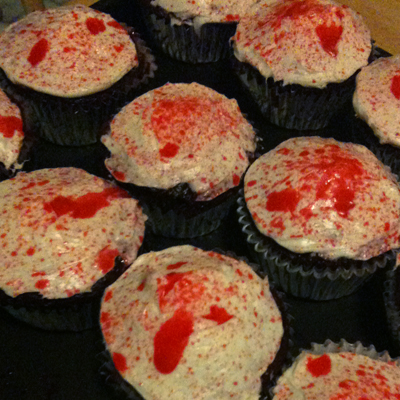 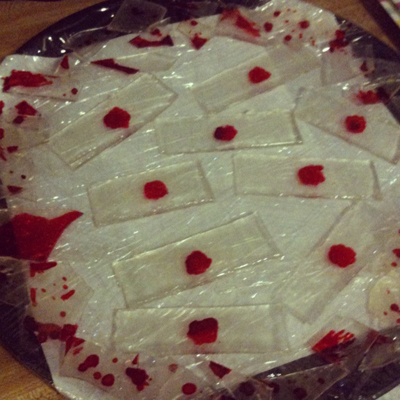 The blood slides I made ended up taking way more time and were way harder than I expected. I got the recipe and some helpful hints here. Unfortunatley it was a little more difficult than they made it sound. It took 3 tries and shattered a lot of my candy. I still used the shattered candy as a shattered glass look for the edges. I was finally able to make it work but cutting the candy almost all the way through before it cooled. Then after it cooled I broke it the rest of the way.

A time consuming project but super cool once it was finished. Plus it made watching Dexter that night even better.

This doesn’t have to be for a Dexter party. It can be used for any creepy halloween party.

Do you have any other ideas on what you could use this candy recipe for?

Here is the recipe for the bloods slides:

Bring sugar, corn syrup, and 2 Tbs water to a boil in a small saucepan, stirring until sugar is dissolved. Don’t stir, but occasionally wash down sides of pan with a pastry brush dipped in cold water to prevent crystals from forming; boil until mixture turns golden, 5 to 7 minutes. If you let it cook too long it will turn a carmel color instead of clear.

Pour the melted sugar mixture in a line down the center of the pan.  Using a skewer or the flat edge of a large knife, spread sugar into a thin flat sheet.  Glass slides are pretty thin, so the thinner the better.  It will also be easier to cut in the next steps.

After you have the mixture spread into a flat sheet, immediately start to score the sheet into strips with a large knife. You don’t have to cut all the way through but cut as deep as possible. Cut your slides to 3 inches x 1 inch.

Once the mixture has cooled and harden, slowly pull the parchment paper away.

As long as your scoring was deep enough, you should be able to break the pieces directly on the score lines giving you perfect blood slides.

If some of the cuts were not deep enough you can heat up your knife over a gas stove or use a lighter and cut deeper lines. This isn’t very good for your knife so I suggest using an old one.

You can smooth out the edges of the slides by using a small amount of water on your fingers.

Lay your cut slides on your baking tray and refrigerate for at least 15 minutes.

Take slides out of fridge.  Using a tooth pic or a bamboo skewer, paint on the blood circle in the center.  You don’t need too much.  A small droplet off the tip of your tooth pic will be enough.  If you put too much on, it will run all over the slide and make a huge mess. Refrigerate again until the dye is dry and you’re done!